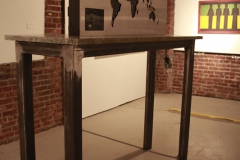 The events of September 11, 2001 in the United States have profoundly affected the political, geographical and interpersonal landscape of countries throughout the world. Wars have been waged, leaders have risen and fallen, economies have crashed, and innumerable families have grieved. But despite the suffering spun out by that day; despite the unrelenting gamesmanship of governments, there exists another platform from which to perceive 9/11 – that of unity. It is from this alternate point of view that the September 11 Memorial Wall proposal was developed. Measuring 18\'h x 48\'w x 4\'d and situated outdoors —the wall will consist of a mono-color stainless steel world map devoid of political borders or topographical features. Steel blocks create longitudinal and latitudinal visual and structural elements around the map. Nearly 3,000 small holes will be drilled through the map, indicating the birthplace of each victim of the September 11 attacks. The sun, boring through these punctures, will metaphorically illuminate the spiritual presence of each person lost, while casting shafts of light toward the ground below. Nearby, individual names will be incised upon a low black granite wall that can serve as both an object of contemplation and a bench from which to view the Memorial Wall. On the reverse of the Memorial Wall, the surface will be a brass, copper and stainless steel mosaic of approximately 200 different flowers representing every region of the world (not just UN acknowledged countries). With this work, I hope to articulate a reflection upon the events of 9/11 that has been largely absent in the years since this tragedy took place. I aim to generate the recognition that our human condition binds us together, over great distances, and through suffering, compassion and time. September 11 Memorial Wall Scale Model Steel, granite, brass, LED strip lighting 18\"h x 48\"w x 4\"d This scale model of the proposed September 11 Memorial Wall was featured in the 2011 exhibition, War, Materials and Lies, Part II, at Time and Space Limited, Hudson, NY.

E PLURIBUS UNUM (Out of Many, One) 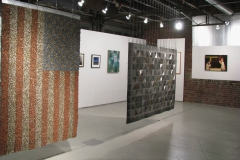 The American flag and the gun are culturally symbolic triggers that evoke passionate opinions, emotions and divisions. When combined in a work of art, these volatile references tend to incite viewers to interpret the work and its maker as either patriotic or un-American. My observations of and concern for this polarity inspired the production of E PLURIBUS UNUM (Out of Many, One).   This work is comprised of more than 30,000 spent natural brass, copper and lead bullets, drilled and hand-stitched together with wire. Bullets are repositioned in a more dynamic and less predictable pattern while maintaining the appearance of a fifty star, thirteen striped flag.   The title of this work is itself embedded deeply within American culture, appearing as is does on the Great Seal and the coins that we carry daily. By juxtaposing provocative icons that are associated with many conflicting shades of national identity, I aim to create a forum for another pillar of American culture that truly unites us all in freedom of speech and expression.

Steel Quilt I and II 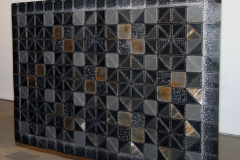 Quilts, like those my grandmother stitched, are soft, warm enclosures meant to cover and comfort. Steel, although materially dissimilar to cloth, often takes the shape of gates and fences, cell bars and guns - structures that provide a very different type of protection and security. The unlikely relationship between cloth and steel, with all of its incongruities, fascinates me, as it also raises associations with the ways in which we shield ourselves from both fear and real harm. Steel Quilt I and Steel Quilt II are composed of 5” square pieces of flat steel that have been cut, ground, sandblasted, drilled and otherwise altered to form complex and overlapping patterns that defy the regularity of a traditional quilt format. Light activates their surfaces, engaging the polished and textured qualities of the squares as an added dimension to the overall motif. Fingerprints – at once emblems of law enforcement and individuality – are indelibly etched upon the metal. Indentations bored in starburst patterns recall the marks made by bullets at rifle ranges and rural road signs. Fragments of barbed wire, spent bullets and bullet shells are also integrated into this work, embellishments at once beautiful and menacing. Quilts are defined by their stitching, and these are no different. Through 10,000 tiny holes wire is threaded, binding each geometric facet to another, as our fears and hopes for personal and collective safety are similarly entwined. Quilts have long served as expressions of community and artistry that are intended to shelter and preserve. And while our twenty-first century notions of self-protection extend far beyond the borders of a hand-made coverlet to include disturbing methods and ideals, it is perhaps fitting to return to the iconic form of a security blanket to explore the sources and products of our anxiety. 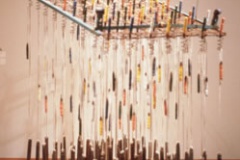 The playful buoyancy of childhood and the often weighty burdens of adulthood are brought together in Berta Leone's Chris Warren's Continuum. Both encumbered by and defiant of gravity, this dense grouping of rope, wood, steel and iron hangs suspended, inches above the floor – its strands of colorful, kinetic levity drawn down by a mass of dark, heavy forms. These materials, and their assembly, draw their metaphorical resonance from the artist's relationship to a neighborhood, its characters, and her own personal resignations. While restoring a number of buildings in inner-city Tampa, Leone collected bulky, rusted sash weights from old windows, as well as tenants' leavings, such as a mattress frame and springs courtesy of Chris, an evicted drug dealer. Broken toys littered the neighborhood as well, discarded by the many young children who lived there. It seemed to Leone, whose attempts to conceive had so far been futile, that motherhood came easily to those around her – even some who were still children themselves. Chris Warren's Continuum is framed by that found skeleton of a bed. Dozens of white jump ropes hang from it; their turned, patined wood handles serving as moments of colorful delight. To the end of each jump rope a sash weight is tied, giving the impression of a black iron cloud that both pulls and hovers.